[Update] You can now order Niryo One ! [/Update]

Designing a robot such as a 6 axis robotic arm is a real challenge. As we’ve already explained in a previous post, a robotic arm is made of three main categories : electronics, computer science and mechanics. Today we will cover the mechanical design of Niryo One, our first product, so you can discover the different prototypes we’ve made so far !

Several steps are needed when designing a mechanical product.

The first step was to clarify the idea, and create the robot from scratch to see what we were able to do (V1 and V1.2). Then we tested different mechanical possibilities (V2-4), until we could say our product was coherent and functional.

From this point we improved the precision and rigidity of the robot. That allowed us to pass integration tests (V4.2). V5 prototype has ergonomics and design improvements and is the prototype we are currently working on.

We perform robot modeling on CAD (Computer Aided Design) software and then we print the parts directly with the 3D printer. This saves a huge amount of time and allows us to make continuous improvements.

Prototype 1 was made to test robotics fundamental principles. We validated rotation movements along 3 axis.

Prototype 1.2 has the previous mechanical architecture, but the front arm evolves with an additional rotation axis. This robot has 4 degrees of freedom.

The evolution of prototype 2 is in the main arm gear, with planetary gear implementation. This centers the motor with its rotation axis, and allows to get a 7:1 reduction as well as a robustness gain.

Prototype 3 still has the planetary gears system, extended to the arm, forearm and wrist rotations.

Our 4th prototype is really different from prototype 3, indeed the "planetary gear" mechanical system was not reliable enough because printed in 3D. This prototype integrates pulleys and belts to actuate the elements in rotation. In addition, aluminium tubes lighten the arm, reduce the printing time of the robot, and improve its rigidity.

Prototype 4.2 is a continuation of the previous one, with improved design and stepper motors integration for each rotation axis.

The last version as we speak is prototype 5, which is very close to the final version. All of the 6 axis are functional. It brings a more ergonomic touch and a sleeker design than the previous version. 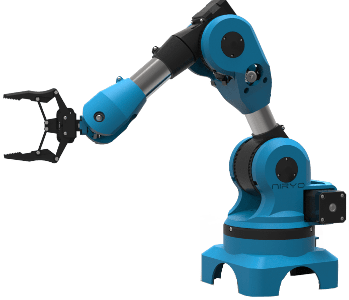 Our goal is to reach mechanical simplicity (which is not so simple !). The simpler the mechanics, the more reliable it is. Using 3D printing is great to accelerate development processes, although sometimes we have to think differently in order to define the most robusts plastic forms.

Niryo One is now available ! 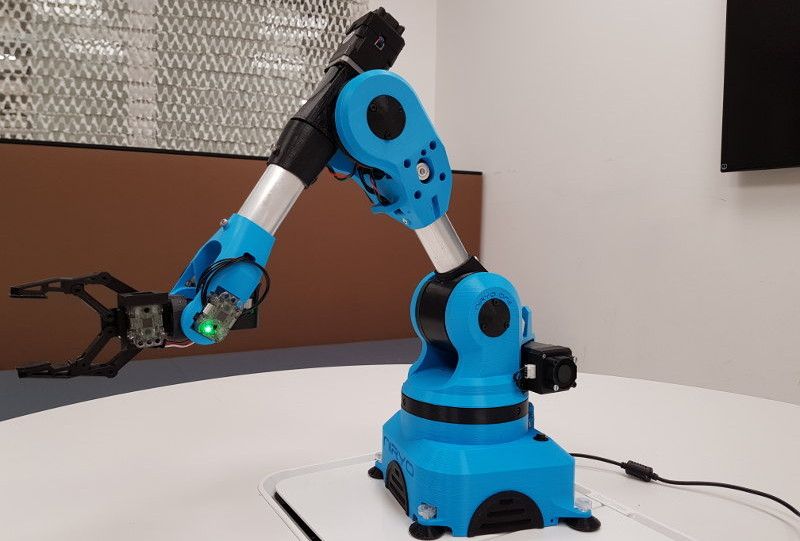 [Update] We've improved the hardware again. After reading this post, check out this one to see the new stuff. [/Update]

We’re back with many good... 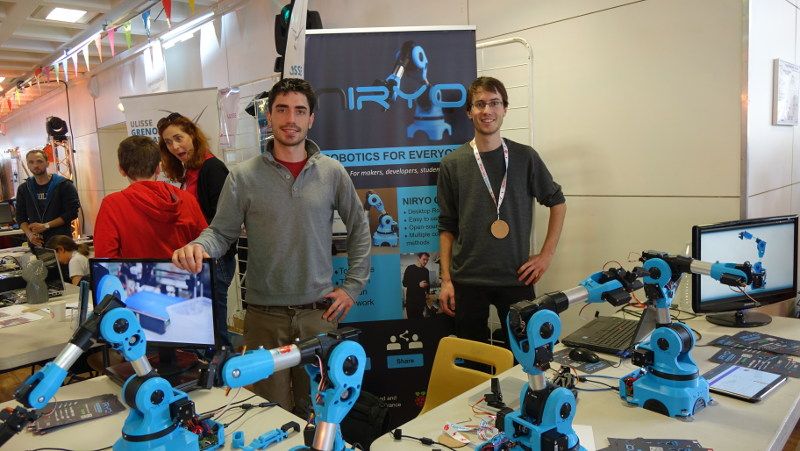 Some news after our first week on Kickstarter

Our Kickstarter campaign is now finished, and it’s a success ! Check out this post to know more about it.

First of all thanks to all the people...